Scuba Diving with seals in the Farne Islands 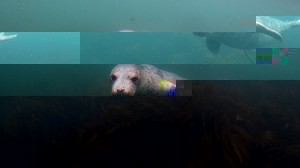 Members from CADSAC travelled up to Seahouses in Northumberland for a weekend of diving, although the weather tried to dampen our spirits, once we got into the water with the playful seals nothing could ruin the weekend not even a touch of sea sickness, torrential rain, or flooding tents. Some of us headed up on Thursday, with cars overloaded with diving equipment we headed up the A1. 4-5 hours later we arrived to Bamburgh where some went to their B and B’s and the rest of the Rufty Tufty Divers (Thanks Reuben I stole that one from you) pitched our tents.

After a long night with the wind howling, rain banging on the tents, crows sqwarking and any other distraction you can think would disturb a nights sleep, we all met up to head down to the Pier. To find some members of the party tents had not only been noisy but quite wet as well. We met the skipper who said the weather is likely to get worse but he can take us to a spot where it would be slightly sheltered and likely to see seals. That was it the magic word was spoken, with hearing chance to see Seals the group forgot about a sleepless night and bad weather we were all up for going diving. 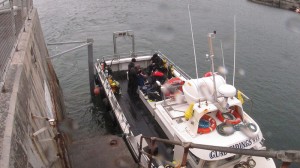 We all boarded the Glad Tidings VII and took a quite smooth trip across to the Farne islands. The nerves of the virgin sea divers began to show so the rest of the group tried to reassure them. Once we were all kitted up and completed our Buddy cheeks everyone seemed a lot calmer and relaxed which was helped by the sight of the seals pounding down the rocks into the sea and surrounded the boat. Once entering the water the seals came and swam around us and were fascinated by our fins which excited all of us. Reluctantly we finished the dive about 45 minutes later. The weather had gotten slightly worse since entering the water, so a few of us felt slightly sea sick with the motion of the ocean. After a timely interval some of us got back in to see if we could find the playful seals, others were feeling a little worse for wear so sat this one out. Although a nice dive seeing how colourful British waters are the seals seemed more skittish this time and kept a distance. After a very rocky boat ride back to shore we were all pleased to be back on dry land and deal with our wet tents from the night before – resulting to us all upgrading to a large static caravan. The luxury of heating was amazing. 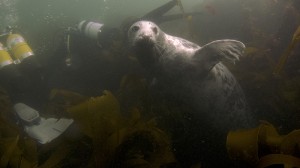 Saturday the diving was rained of, although in the afternoon the sun was gleaming. We spent the day looking into the history of the heroics of Grace Darling and her father William and then a quick tour around the Bamburgh castle.

Sunday morning the weather had cleared up so we set out for another days diving, because a few others had joined our group which were unable to make it on Friday we went searching for seals. A nice wall dive with playful seals started the day followed by a shallower dive with many seals and jelly fish.

The Farne Islands are a great place to dive or all levels of divers, check out the photo gallery of pictures of our trip.