Back in September a group from CADSAC dive club boarded a plane to head for warmer weather in Egypt. This was my first scuba diving trip abroad so I was full of excitement and anticipation as all the other members had been on numerous trips.
Once arriving we soon joined our boat, the Blue Planet and all clambered on to claim our cabins. We spent the first night in port in Hurghada. 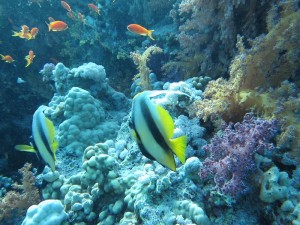 After an early start, which turned out to be not so early as it was going to get, we set of to our first dive site, Poseidon’s Garden. This was a nice shallow dive to make sure everyone was comfortable with there dive gear etc.
Poseidon Garden – this dive is on a large coral block in the lagoon behind the main reef. There is a very large coral garden next to the reef consisting of huge table corals and brain corals. Between and on the corals, clams of many sizes and colors can be seen, plus large numbers of masked puffer fish. Large shoals of banner fish and butterfly fish can always be seen here. This dive is also often done as a drift so that more of the coral formations can be visited.
I could not get over how clear the water was, if all the dives were going to be like that it was going to be a great dive trip.

Next we moved on to Shaab Mahmoud (small crack) this was nice dive in a large shallow lagoon whcih we stayed for the afternoon dive and then an evening dive. My first night dive in the sea, it was amazing, I think that I was more worried doing my first night dive in Stoney Cove than I was in the middle of the red sea. After a couple of beers I slept on the deck fulfilled in completing a most exhilirating day.

[singlepic id=324 w=320 h=240 float=left]A new day started at 4.30 am and we all slugishly moved around the boat trying to get caffeine to wake us up and as much water in ourselves to rehydrate ourselves, after a briefing from our dive guide we arrived at Shark reef/ Yolanda Reef. This dive started along a coral wall with a drop down to 100+ meters, the coral was fantastic, along the reef came to a coral garden with a multitude of marine life. Further round we came to the Yolanda Wreck, a wreck that made this reef its final resting place in the 70’s. Its cargo of British standard toilets, bath tubs and pipe tubes remain on and forever as part of the shallow reef.

[singlepic id=329 w=320 h=240 float=right]The afternoon brought us to the infamous SS Thistlegorm wreck, Sunk by German bomber planes in World War Two, SS Thistlegorm has lain at the bottom of the sea for over sixty years. Located in the Straits of Gubal, Northern Red Sea this famous vessel has been the subject of much activity and drama during its two lives as both a seagoing merchant ship and as a world-class diving site. Because of the size of the wreck we split it into sections with multiple dives over two days, including a not so popular night dive, (not sure if not popular by such an eventful day and a forth dive was too much or thought of swimming a wreck at night).

We Then Head to Shag Rock to the Kingston, the wreck of the Kingston lies on the eastern side of the southern of two large pieces of reef which are known as Shag Rock. Shag Rock is the name of the southern reef; however in the absence of a name for the northern piece these two are often grouped as Shag Rock, part of the much larger reef system – Sha’ab Ali. Incidentally Shag Rock gets its name from the cormorants or “shags” which used to perch on an old light frame which was visible in the early 1990’s on the southern reef. At very low tide these birds can still be seen sitting atop protruding bits of reef.

[singlepic id=347 w=320 h=240 float=left]The Kingston is a very old wreck, built in the early 1870’s and you will often here her referred to as the Sara H, or Sarah H. This label actually came about in the absence of correct identification in the late 1980’s, early 1990’s. One of the largest safari boats I used to see in this area in the early 90’s was a dark blue vessel by the name of “Sea Surveyor”. On board was a Dive Guide, Sarah Hillel and so the wreck was named after her. This was our fantastic encounter a very hungry turtle.

[singlepic id=370 w=320 h=240 float=right]We headed top our next big wreck, the Rosalie Moller, The Rosalie Moller sank in the 1940’s with a cargo of Welsh coal, which is all that can be seen in the holds except for in the engine room. It was hit by a bomb on the starboard side, leaving some damage. Penetration is possible as the gaps are large, but is not necessary as the interesting parts of the wreck are visible from the outside. Because this was a deeper dive 35 meters to the deck it was a shorter dive.

Then on to Shaab Abu Nuhas Reef an area prone to ship wrecks, either mistakes or arguably insurance jobs. Sha’ab Abu Nuhas is a large triangular shaped reef. With four main wrecks. The reef is located just a little bit north of Shadwan Island and the area is covered with shipwrecks. The rough north side can make moorings impossible and the big unpredictable currents have been known to dislocate divers. Here we dived the Chrisoulis K, a Greek freighter ship carry tiles, in August 1981, and the Giannis D which sank in 1983, split in half down the middle.

[singlepic id=389 w=320 h=240 float=right]A few more reef dives ion the area and then the head back to Hurghada, stopping at Dolphin reef, we were told that dolphins were rarely seen there though. That evening we saw some dolphins in the distance and the following morning dive a family of over 6 dolphins swam through our group, a great way to end the trip, I would post photos of the dolphins but in my exceitemnet I managed to turn my camera off and sat there filming not realising.

Back to Hurgahada and our final dive on the wreck of the Minesweeper, (El Mina). The El Mina was bombed by the Israelis in 1969 in Hurghada bay, but still has a sister ship afloat nearby. The wreck lies on its side and there are a lot of small holes to peer into and penetration is [singlepic id=483 w=320 h=240 float=left]possible, although tight, through a significant amount of the wreck. Sea urchins are abundant on the wreck and a ray hovered around.

Back to Hurghada and a night in a hotel before heading back. This was my first dive trip to the Red Sea but definately not my last. Thanks to John (mungo) For organising such a great trip.

Check out the photo gallery of some of our photos from the trip, some courtesy of Rob McKenzie here.