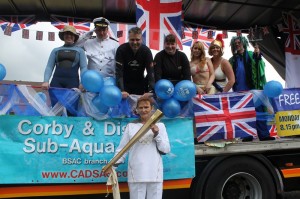 Corby & District Sub Aqua Club attended the Corby Carnival again yesterday, July 14th.  Despite the bad weather there was a good turn out and lots of fun had by all.  Corby Carnival showed off Britain at its Best to crowds who lined the streets of the town.  Which all concluded in West Glebe Park for an afternoon of sun, yes the sun actually came out and stayed with us for the afternoon.

While waiting for the parade to begin CADSAC had the pleasure of Sue Miller, the olympic torch bearer from Corby to show us the torch and pose for a photograph with us, although we could not talk her into learning to scuba dive.

There were many floats in the parade and much thought had gone into decorating them all and the participants.

Check out our gallery of Photos from the day. 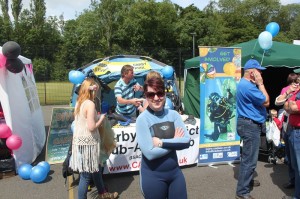 The day ended at West Glebe Park where we also had a stall promoting our FREE try dive on Monday the 16th July.  Chris did a great job of manning the stall all day and there was a lot of interest shown in the club. 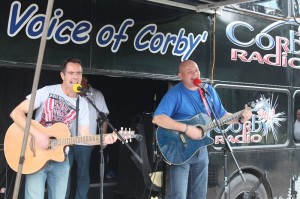 The day ended with the band  “Stubbeys” which CADSAC’s very own Mark Thompson is a member, despite the Grampian Pipe Band wanting to finish early so their set was cut short it was a great day all around.